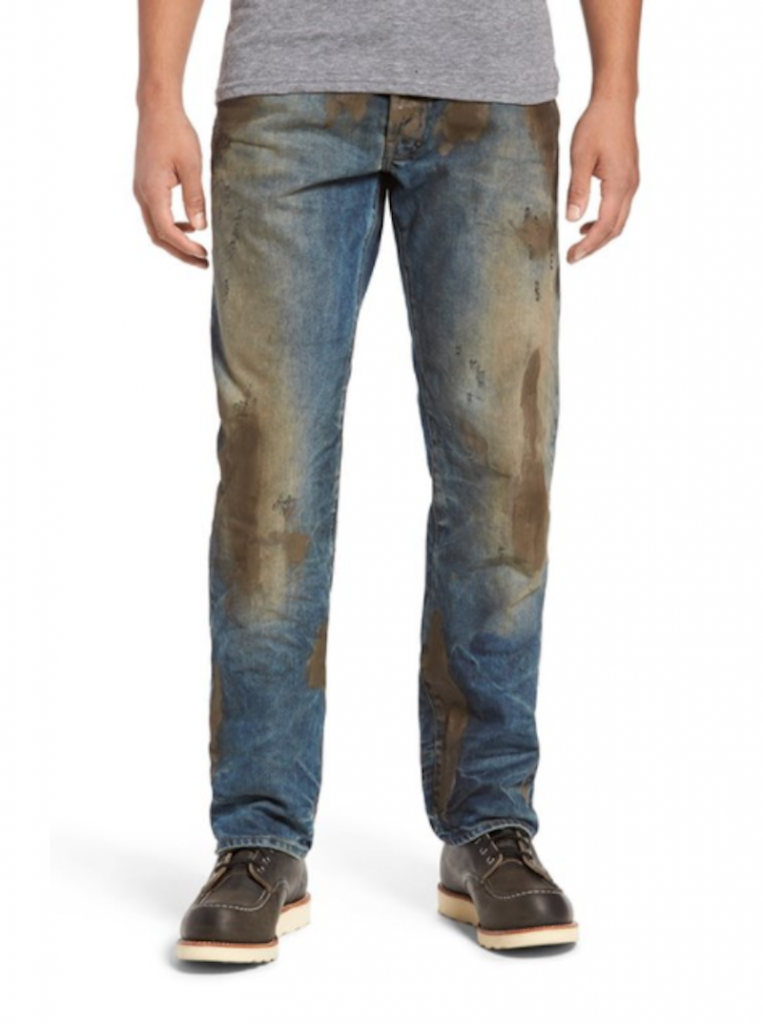 Nordstrom sells jeans covered with fake mud for $425. The fake mud generated real outrage on Facebook where the story was trending Tuesday morning. Print stories flooded in all day.

Born and raised in Washington State, I shopped at Nordstrom when it only carried shoes. I was a hostess and fashion model at the grand opening in Portland, Oregon when Nordstrom merged with Best and Company, bringing clothes into the Nordstrom product line.

The new jeans are manufactured by PRPS, a luxury denim brand out of New York. Marketing hype describes the jeans as “rugged Americana workwear that’s seen some hard-working action” and proudly feature “a crackled, caked-on muddy coating that shows you’re not afraid to get down and dirty.”

Wrote one reader, “Gotta love being able to look like I have fed the pigs, helped deliver a calf, and get the tractor unstuck without ever having to leave my BMW.”

I’m here to say, high end fashionistas dare to wear the jeans ‘cause they’ve got money in their pockets. Take away their money and they wouldn’t be caught dead in them. They think they’re cool, which translates to “so brave to wear something so awful…I’m better than you.”

According to Mike Rowe, who hosts the TV show ‘Dirty Jobs,’ “The Barracuda Straight Leg Jeans aren’t pants. They’re not even fashion. They’re a costume for wealthy people who see work as ironic—not iconic.” Going further, he states, “Finally—a pair of jeans that look like they have been worn by someone with a dirty job…made for people who don’t.” He offers up the jeans “as proof that our country’s war on work continues to rage in all corners of polite society.” Amen.

Tim Teeman, writing for The Daily Beast said it best, “Nordstrom’s ‘Muddy’ Jeans Will Not Lead To The End of Humanity, But It May Be Close.” Right in line, Republican Senator Ben Sasse of Nebraska wrote, America was nice while it lasted.” More from Teeman, “…the jeans don’t signal that you are a decent paragon of manhood who’s done an honest day’s work…The only mud you’ve ever gone near is at the beautician’s. The mud jean is a ludicrously self-sabotaging men’s style piece…It isn’t a seductive look. It’s a creepy one. It’s not manly or cool to look such a grotty mess.”

Reporter Lara Parker of BuzzFeed calls the jeans with fake mud on them “The Pants No One Asked For…And they’re only $425!” Going further, she writes,” If this wasn’t enough of a mud-caked look for you, there’s also a matching jean Jacket another $425.”

Jamie Feldman reporting for the Huffington Post, suggests that “If you really feel the need to walk around looking like a pile of dirt, it’d be in your best interest to just roll around in the mud in the jeans you already have.”

CNN Money reporter Aaron Smith points out “the filthy fashion isn’t actually new,” and he’s right. Utility Chic, Sewer Chic, and Pseudo-Poverty distressed and deconstructed garments have been in stores for twenty years. I must have 6 or 8 variations in my demo collection to document the down-trend. I bought a pair of brown-stained “manure pants” at Rampage in 2000. The manager told me, “Anything to make the parents mad.” Luxury fashion retailers are just now playing catch up, Nordstrom being the latest and over the top with “fake mud.”

There was a time, when the uncles were running Nordstrom, that I’d walk into my favorite department and wish to buy virtually every high quality classic piece they carried. Since the nephews took over, I seldom take clients shopping there anymore and fake mud isn’t about to lure me back.